The Lake Winnipeg Foundation is pleased to announce that the Seine-Rat River Conservation District has been chosen to receive the 2015 Alexander Bajkov Award.

Named in memory of pioneering fisheries biologist Alexander Bajkov (1894 – 1955), this award was created by LWF in 2008 and is presented annually to those who demonstrate outstanding efforts to protect and restore the health of Lake Winnipeg and its watershed. Past recipients have included scientists, politicians, educators and journalists.

This is the first year in which the award has been given to an organization rather than an individual – and it is fitting, as the task of protecting and improving the water quality of Lake Winnipeg is very large and requires many dedicated people with different skills working together.

The Seine-Rat River Conservation District (SRRCD) was established in 2002 to promote sustainable watershed stewardship in an area of southeast Manitoba with some of the largest nutrient loads flowing into the Red River and Lake Winnipeg. With offices in La Broquerie and Vita, the SRRCD assists local people in working together to set resource management priorities, develop and deliver land and water management programs, and respond to local issues in a sustainable manner. 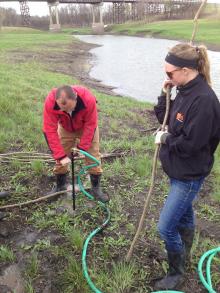 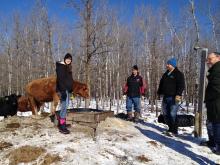 To reduce nutrient loading to Lake Winnipeg, the SRRCD is actively promoting and supporting best management practices in rural Manitoba. It is the first conservation district to participate in the community based monitoring program initiated by LWF in 2015. 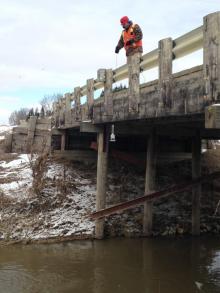 SRRCD efforts have led to involvement of new municipal partners, and improvements in municipal cooperation and relations. This grassroots organization is working hard to bring about important changes necessary to improve the health of Lake Winnipeg. Learn more at the SRRCD website.

The Seine-Rat River Conservation District was presented with the 2015 Alexander Bajkov Award on April 26 at LWF’s 2016 annual general meeting.

Alexander Bajkov Award nominations are invited annually from members of the Lake Winnipeg Foundation, scientific, academic and arts communities, and the general public.